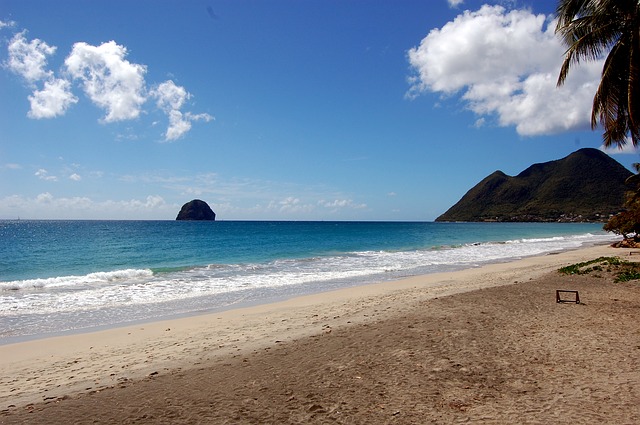 Martinique is a piece of France in the Southern Caribbean: on the surface, the centuries of French occupation are very obvious, but look closer and you will discover its Caribbean soul. Located just north of Trinidad and Tobago, this beautiful island will enchant you with its unique blend of beaches, culture and charm.

Although tourism contributes enormously to the economy, you will find that nearly one-third of Martinique is still forested and you will see fields of pineapple, sugar cane and bananas while walking. The fascinating capital of Fort de France is breathtaking Caribbean scintillating with hundreds of sailboats; if you want to go to the beach in a quieter setting, go south to the Salines, where you will certainly find sun and solitude on the fine white sand.

The original traditions of Martinique, such as the famous music Zouk which has gained popularity in Europe, will not fail to fascinate you; just like the Beguine, an Afro-French dance born here. Of course, you can always indulge in the content that you are passionate about in typical West Indian activities such as snorkeling around Grand Anse and Sainte Anne. You can even go hiking because the island offers beautiful trails thanks to its volcanic mountainous terrain.

Martinique, is part of the arch of the Lesser Antilles, volcanic chain tracing the boundary between the Caribbean Sea and the Atlantic Ocean, nearly 7000 km from the metropolis.

Origin of an ancient volcanic activity

The West Indies arch represents the subduction zone where the Atlantic plate dives under the Caribbean plate. Ten million years ago, this meeting of two plates led to the emergence in the open air of a chain of volcanoes. Today, it still remains on this arc volcanic activity more or less intense (Mount Pelee, Soufriere, Montserrat, St. Vincent, St. Lucia …)

Its volcanic relief has given this small French island a quite varied landscape consisting of mountains, cliffs without forgetting the difference between the beaches of the South and those of the North due to the color of the sand of white sand in the South and black in the North .

In the center, the vast alluvial plain of Lamentin hosts the capital, Fort de France. More than a third of the island’s inhabitants live in this privileged region. To the south, apart from the Vauclin, a very old volcano well leveled by erosion, only dull hills or small hills remain in Creole. The rugged coastlines offer a large number of coves and coves where the beautiful beaches so popular with visitors nestle.

Frequently shared into four neighborhoods for practical reasons, each offers unique sites and striking contrasts that make Martinique an amazing mosaic of landscapes and colors.

Martinique is located in the heart of the Caribbean archipelago, and is part of the Lesser Antilles or “windward islands”. Its coasts are bathed in the East by the Atlantic Ocean and in the West by the Caribbean Sea.
Martinique is about 7000 km from France. Its closest neighbors are in the north, Dominica (25 km), Guadeloupe (120 km) and in the south, St. Lucia (37 km).
The terrain rises gradually from the coast to the center and north, where are grouped Pitons du Carbet. The highest point of the island (1,397 m) is Mount Pelee.
In the center, the plain of Lamentin makes the transition with the southern region of the island, which offers a succession of small hills and valleys. The saline beach, in the extreme south, seems straight out of a postcard.

The population of Martinique is a diversity that is due to the many crossbreeds, resulting from encounters between the different ethnic groups that once settled on our island, (European, African, Hindu, Caribbean, Asian.)

This diversity of the population is reflected in the existence of a colorful folklore, popularized in Europe and North America by groups of dancers and singers.

The Békés form a real caste, the names of the big families can be found on the facades of the majority of the big companies of Martinique. They still control the economy of the island: the cultivation and trade of bananas, sugar cane, rum, they have also managed to diversify their activities.

The Lebanese and the Syrians form, as everywhere else, a community whose essential activity is trade, and hold in the island, the major part of the stores of jewels, fabrics and clothing, in particular in the large shopping streets of Fort de France.

The Indians of the Indies are a few tens of thousands in Martinique. Despite a certain creolization of their way of life, the coolies have managed to preserve many elements of their cultural heritage. The Hindu temples can be easily spotted in the countryside by the presence of tricolored masts displaying red and blue flags and under which receptacles hold offerings, candles and oil lamps.